Brownies are one of the most widely enjoyed desserts in America. They are now more prevalent and easier to make than ever since they are readily available in the form of boxed mixes. Regardless of whether you’re making yours from scratch or using a store-bought mix, implementing these tips will help you achieve the perfect fudgy, chocolatey brownies.

Here are six tips for the best brownies:

Keep reading to learn more about how these tips will take your brownies to the next level. You’ll also discover the best sugar to use in your brownie mix, how to fix oily brownies, and some tips on making the best fudge brownies. Check it out! 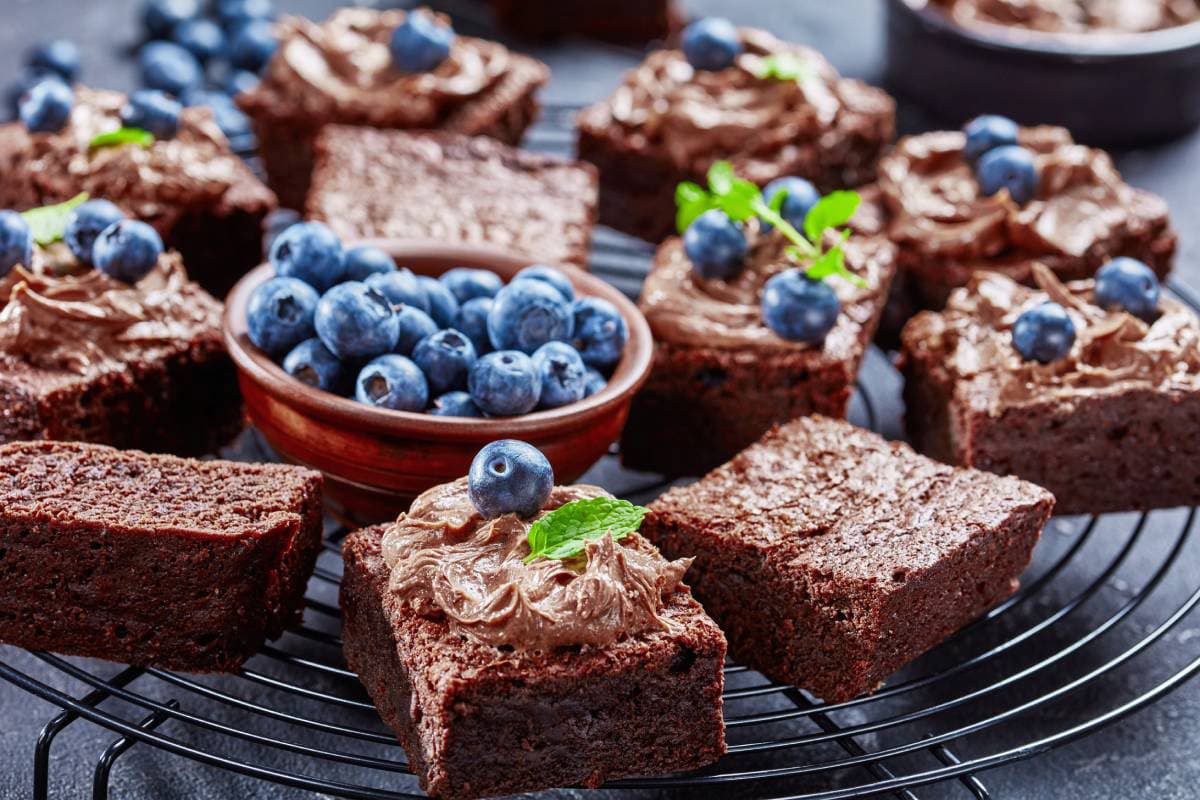 1. Heat the Sugar Mixture Before You Add It to the Batter

Heating your sugar and butter before adding them to the rest of the egg and cocoa mix will help create a shiny top crust for your brownies. Heating the mixture will also help dissolve the sugar, preventing unwanted caramelization and sugar-speckled brownies.

Heating the butter and sugar mixture is also a great idea if you use granulated sugar instead of caster sugar in your brownies (more on that later). Heat your sugar and butter in the microwave or over the stove top using low heat.

Continue to heat the butter and sugar until they’re hot, but not to the point that they begin to bubble. The mixture should look shiny as you stir it, at which point it’s time to remove from heat and add it to your batter.

2. Beat the Eggs and Sugar Correctly

A lot can go wrong if you don’t beat your eggs correctly, and many brownie-baking enthusiasts might argue that this is the most critical step.

Beating your eggs helps create the perfect texture for your brownies so that they maintain their consistency throughout the entire baking process.

Many baked goods call for baking powder or baking soda, which are the ingredients that help leaven the dough and enable it to rise and create that delicious airy texture that most desserts are famous for. Most brownie recipes don’t use any leavening agents.

Therefore, it’s essential to whip your eggs correctly because beating your eggs and sugar until they are fluffy acts as a leavening ingredient for your brownies.

You should whisk the sugar and eggs together very well, as doing so will add air to the batter, which will prevent your brownies from becoming overly dense or flat. It will also help create a soft and tender brownie.

Use a hand or standing mixer to beat your eggs and sugar together. Be sure to whip them thoroughly and rotate the hand mixer throughout the batter so that you don’t have any lumps remaining in your mixture. You want to beat the sugar and eggs until they are light and fluffy.

Nothing ruins brownies faster than having the bottom stick to the pan, causing the entire thing to fall apart. To remedy this, prepare your baking materials by lining your baking pans with parchment paper and spraying them with cooking spray. Parchment paper is a better choice than aluminum foil because it’s specifically designed for baking and is naturally nonstick.

4. Spice Up Your Brownies with Flavor Enhancers

Take your brownies to the next level by adding additional flavors to your brownie mix. These enhancers work great for both boxed brownies and brownies made from scratch.

Try Substituting Water for Coffee in Your Brownie Mix

Coffee makes an excellent substitute for water because it adds depth to your brownie mix. Coffee naturally enhances chocolate’s taste, which is why many chocolate cakes include coffee elements. The coffee will bring out the natural bitter aspects of the chocolate and enhance its rich flavor without giving your brownies a coffee taste or aroma.

Cracked salt or sea salt are excellent additions to brownies. Just as a bit of salt on fruit will enrich its natural sweetness, salt also goes well with other desserts or baked goods. Salt, in particular, pairs well with chocolate and will pull out its natural sweetness. Be sure not to oversalt your brownies because a little bit goes a long way.

Add Vanilla Extract to Your Brownies

Vanilla is an excellent balancing flavor for coffee, desserts, and even breakfast foods, so it’s no surprise that adding vanilla adds a pleasant touch to your brownies’ taste. Pure vanilla extract will provide just the right amount of balance needed for your brownies, especially if you choose to add coffee to the mix.

Vanilla extract balances the bitter elements in the chocolate with a smooth, sweet flavor that’s evident but not overbearing. Use just a little bit of pure vanilla extract to upgrade your traditional brownies.

Add a Dash of Espresso to Your Brownies

Espresso is a popular addition to many chocolate desserts, especially cakes and brownies. The espresso adds a rich layer of flavor to ordinary brownies because it naturally enhances chocolate’s taste and pulls out the deep chocolate flavor.

Some people fear that adding espresso or coffee to their chocolate desserts will make them taste bitter. However, that’s not the case. The espresso simply brings out the flavor that is already there.

Adding chocolate chips (or, the alternative I always opt for, chocolate chunks cut from a bar) to your brownie mix adds more chocolate flavor and sweetness to your dessert. It provides the brownies with an additional textural element while enriching their flavor and mouthfeel.

5. Don’t Over Bake Your Brownies

The secret to fudgy brownies is to slightly underbake them. Many recipes provide a time range for cooking your brownies. Start cooking them at the lowest allotted time and check from there. Remember that your brownies will continue to cook even after you remove them from the oven, so you can take them out a bit early to ensure they will be chewy.

You want your brownies to be gooey without being raw. It’s important to let them thoroughly cook so that you eliminate the risk of food poisoning from bacteria that lies in undercooked food, particularly raw eggs.

If the toothpick contains a wet batter mixture, it needs more time in the oven. As soon as the brownies are cooked all the way through, you can remove them so that they maintain their chewy texture.

This tip requires extra forethought when planning out your brownies. If you know you’re going to make brownies ahead of time, and it isn’t a spur of the moment decision, set your eggs out to reach room temperature before using them in your batter.

Allowing your eggs to reach room temperature enables them to mix better in your batter. This means the mixture will combine more cohesively, and you’ll get less separation of ingredients. When your ingredients stay together, the brownies will remain intact in the oven instead of falling flat and crumbling.

Granulated or Caster Sugar for Brownies

Caster sugar might also be labeled as “superfine” sugar in United States grocery stores, and many people describe it as a cross between powdered sugar and granulated sugar. Powdered sugar, also known as confectioners’ sugar, is ultra finely-ground granulated sugar. It’s mixed with cornstarch to keep the sugar from clumping together, and it has a loose, powdery texture.

Caster sugar’s texture is something in the middle between the two aforementioned varieties. It’s not as refined as powdered sugar, but it’s not as coarse as granulated sugar either.

How To Fix Oily Brownies After Baking

There are a few reasons why your brownies might be oily after baking them. Sometimes you use too much butter, which causes the brownie mixture to bubble in the oven, making the top of the brownie greasy. It’s also possible you haven’t mixed your brownies enough, which would cause the ingredients to separate.

If you’re baking fudge brownies, they will tend to be on the oily side regardless of the quality of ingredients or the ratio. Try blotting the brownies with a paper towel to remove some of the excess oil.

You can also add a small amount of flour to the top of the brownies to help absorb the oil. Be careful not to add so much flour that you can taste it on top. Try adding other ingredients that can absorb oil to your brownies, such as nuts. Chopped pecans or walnuts are a clever remedy to add to your brownies if you find they are too greasy after taking them out of the oven.

How To Fix Oily Brownies Before Baking

Sometimes your brownie mixture is too oily before even sticking it in the oven. Often, the fat can separate from the batter, which makes your brownies extra oily after you bake them. If you notice your batter looks rather greasy, add about a tablespoon of milk to your brownie batter to help remedy the consistency and remove the excess oil.

You could also try adding more flour to your brownie mix before you bake it to help thicken the mixture and eliminate excess oil.

To get the best fudgy brownies, opt for butter instead of oil. Butter provides the best taste for brownies and is a powerful flavoring agent. Oil is relatively tasteless and won’t do anything for the flavor of your brownies.