Pyrex dishes look fantastic, are easy to keep clean, and most foods don’t stick to them. As a result, Pyrex is an excellent material to prepare and store your food in. However, can you also use your Pyrex dish when baking a dessert or roasting a chicken in the oven?

Pyrex can go in the oven. Pyrex glassware is safe for oven use up to a specific temperature, and you can put it directly into a preheated oven. However, the plastic lids of some Pyrex dishes are not safe. If you put the plastic cover on the dish in the oven, it will melt.

Continue reading for a breakdown of how and when you can put your Pyrex dishes in the oven. In the following sections, I’ll also take you through some of the most common pitfalls you’ll want to avoid while doing so. Moreover, I’ll examine how the material reacts to different types of high-heat cooking equipment. 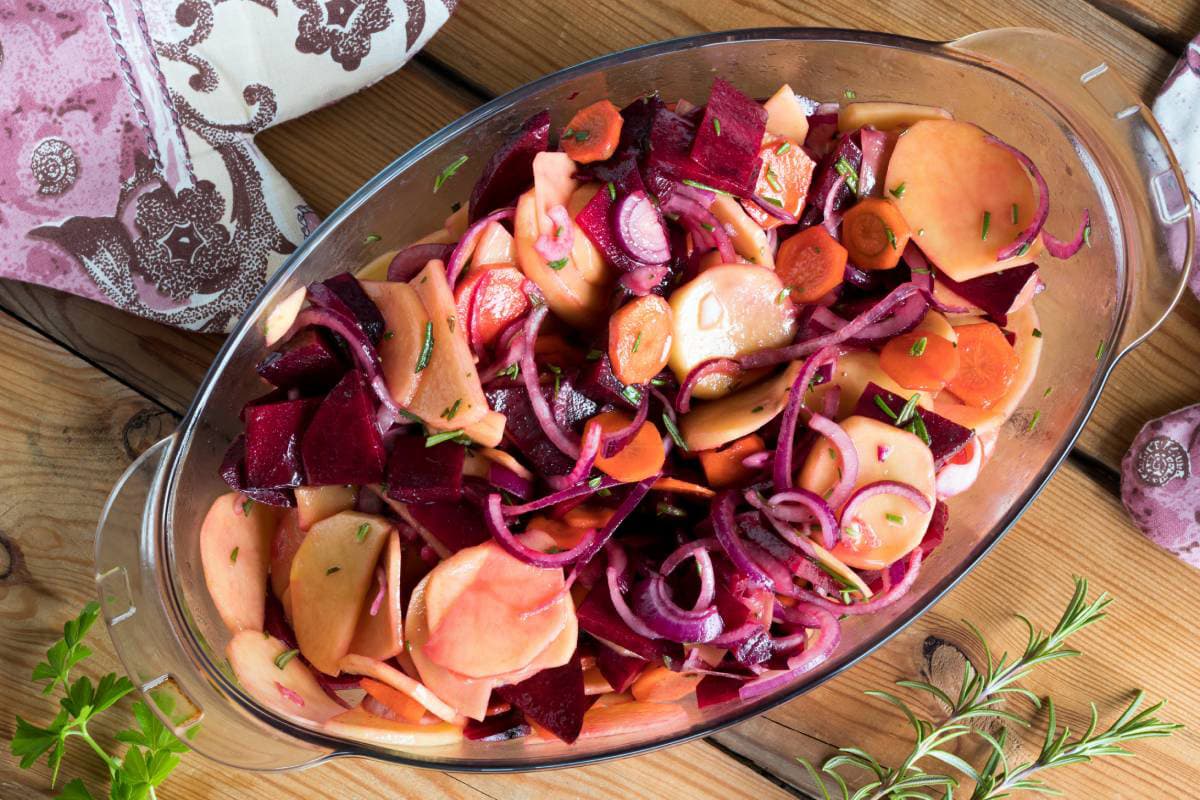 What Temperature Is Pyrex Safe in the Oven?

Pyrex is a great option for baking, roasting, and storing various foods. However, Pyrex is not perfect, and it has its own limitations. One element that you need to be wary of is the temperature level in your oven when you’re using your Pyrex dish.

Pyrex is safe in the oven below 450°F (232°C). If Pyrex is heated above this temperature, it could become damaged. However, most ordinary ovens do not reach temperatures above 450°F (232°C), so in most cases, this is not something you need to worry about too much.

Pyrex is also resilient to cold temperatures. In fact, Pyrex can withstand temperatures as low as -313°F (-192°C). Therefore you can also use your Pyrex dishes to store food in your freezer without worrying about them breaking.

Can Pyrex Go From Fridge to the Oven?

Pyrex is not just used to cook food. You can also use your Pyrex dishes to store food in your refrigerator conveniently. However, is it safe to take a Pyrex dish directly from your fridge and put it into a preheated oven?

Pyrex cannot go from the fridge to the oven. When Pyrex is heated up too quickly, it can suffer structural damage. This is because Pyrex is a type of glass, and glass does not fare well with rapid changes in temperature as the phenomenon can cause cracks to form.

Pyrex is more robust than ordinary glass, but it is still a form of glass. As a result, exposing the dish to drastic temperature fluctuations will cause it to break apart swiftly and shatter.

Following the same logic, you can’t take Pyrex from the oven and place it directly into the fridge either, as the process will have a similar damaging effect. Cooling Pyrex too quickly can also cause it to shatter, as it’s the change in temperature that causes the material to break and not heat by itself.

Can Pyrex Go in the Oven on Broil?

The broil setting on your oven is designed to sear or crisp food similar to grilling. Broiling is often used to give your dishes a crispy finish that adds textural interest to your meal. However, can you put a Pyrex dish in the oven on the broil setting?

Pyrex can not go in the oven on broil. Broil settings typically use very high temperatures to quickly brown, crisp, or cook food. The temperatures reached when broiling often exceed the temperature limit of Pyrex glass, causing it to break and make a mess.

The broil setting on your oven usually sets the temperature to about 550°F (288°C). This temperature is well above the safe limits of Pyrex. As a result, broiling using a Pyrex dish is a bad idea that can lead to a messy cleanup at best and a risky explosion at worst.

To broil food, you also must place the dish close to the heat source to get the desired effect. This means that the dish will heat up quicker. This puts Pyrex at risk as the material rapidly changes its temperature. As mentioned before, this phenomenon can cause severe structural damage.

Can You Put Pyrex in a Convection Oven?

You can put Pyrex in a convection oven. Pyrex is safe for use in both conventional and convection ovens. As long as the Pyrex is not cold before going into the oven, and the convection oven is not heated above 450°F (232°C), the equipment is perfectly safe to use.

Using Pyrex in a convection oven is pretty much the same as using it in a conventional oven. As long as the Pyrex dish is not heated too high or the container is not cold as it enters the oven, it’s completely safe.

Can Pyrex Glass Explode in the Oven?

If you watch as many internet clips as I do, you’ve likely seen a video of someone putting a Pyrex dish into an oven, and it almost instantly explodes into a million pieces. However, can this happen to your Pyrex dish, or was this a freak accident?

Pyrex glass can explode in the oven when the Pyrex is cold before being put into the oven. Pyrex glass explodes because it contracts when it’s been chilled. Then, when the dish is rapidly heated in a hot oven, it expands quickly, causing it to lose structural integrity and shatter.

Pyrex glass explodes when its temperature changes too quickly. This is due to the same phenomenon that causes Pyrex to crack when heated too quickly. This process is known as thermal fracturing, and all types of glass are vulnerable to it.

Is Scratched Pyrex Safe to Use in the Oven?

While Pyrex is incredibly durable and heat resilient, it can still crack, chip, and get scratched. When this happens, do you need to throw away the Pyrex dish, or is it still safe to use in your oven?

Scratched Purex is not safe to use in the oven. Pyrex is unsafe for cooking if there are any cracks, scratches, or chips present on the dish. Heating or chilling the damaged container could worsen the damage and cause it to shatter. Small pieces of glass could also make their way into your food.

Scratches, chips, or other surface damage to glass dishes, including Pyrex, drastically weaken the dish. This makes it less shock and thermal resistant.  As a result, when the dish is exposed to a rapidly changing temperature, it will be more vulnerable to shattering.

Therefore, it’s a bad idea to use damaged Pyrex in an oven or cold storage like your fridge or freezer.

Can You Put Pyrex in the Microwave?

By this stage, you’re very aware that Pyrex is safe to use in both conventional and convection ovens. However, what about the microwave oven? Microwaves don’t heat food like other ovens, so will this have an adverse effect on your Pyrex glassware?

You can put Pyrex in the microwave. Pyrex works just fine in microwaves, and it allows you to heat up meals on the dish quickly. However, much like using Pyrex in an oven, the dish must not be cold before putting it in the microwave, as thermal fracturing will cause it to break.

It’s important to remember that you never put a damaged Pyrex dish in your microwave either. Damaged Pyrex is more vulnerable to thermal fracturing, which could cause the container to shatter spectacularly.

Can You Put Pyrex in an Air Fryer?

Air fryers are a kitchen appliance that have recently exploded in popularity. Air fryers allow you to fry your food without adding hundreds of calories worth of cooking oil. But can you use Pyrex dishes in your air fryer?

You can put Pyrex in an air fryer, provided it’s an oven-safe dish. However, air fryers heat up quicker than ovens, which could cause your Pyrex dish to crack. On top of this, air fryers can reach very high temperatures in which Pyrex isn’t safe anymore, so make sure to set the air fryer to low.

While you can put Pyrex in your air fryer, doing so does carry some risks as the air fryer can become too hot or fluctuate in temperature too quickly, which, as mentioned, can harm the Pyrex dish. However, in most cases, an unharmed Pyrex dish will not break in your air fryer.

How To Get Baked-On Stains off Pyrex

While your Pyrex dish is excellent for cooking delicious meals like a roast chicken or a scrumptious fudgy brownie, it does have some drawbacks. One issue that homecooks often face when using Pyrex in the oven is staining. Stains can occur after roasting food and are usually pretty resilient and tough to clean.

Follow these steps to get baked on stains off Pyrex:

It’s crucial that you use a nylon sponge to scrub the dish and not materials like steel wool. Steel wool is too hard and could scratch the Pyrex dish, weakening it as a result.

What Makes Pyrex Different From Glass?

For a long time, glass dishes could not be used in the oven as they would deform or break. However, Pyrex dishes are perfectly safe to use in the oven, yet the material still looks and feels like glass. So, what sets Pyrex apart from ordinary glass dishes?

Tempering is a process that involves heating and cooling a material, usually a type of metal or glass. This process hardens materials and increases their resistance to heat. This tempering process is what sets Pyrex apart from regular glass.

Is Pyrex Full of Lead?

Another question that homecooks often ask regarding Pyrex’s safety has to do with its composition. Some people believe that Pyrex contains lead, which is a safety hazard, especially considering you’re using the dish to cook and store food for your family.

Pyrex is not full of lead. New Pyrex dishes contain zero lead and are perfectly safe to use. However, old Pyrex dishes may contain some lead, as in the past, Pyrex contained unsafe levels of lead. As a result, exercise caution when using older Pyrex dishes as they likely contain lead.

Pyrex is not the only type of dish that once contained lead. Many dishes had high quantities of lead up until the 1970s. Consuming food from lead containers is linked to several serious health issues, including brain damage and death.

Therefore, if you have a Pyrex dish that’s decades old, it’s best to stop using it. Older Pyrex can be dangerous to cook with or store foods in. And it is not just Pyrex dishes. It will help if you exercise caution when using dishes made before the 1970s, as there’s a decent chance they contain too much lead.

Pyrex is an excellent dish for cooking and storing food. Pyrex is safe to use in almost every type of oven, provided the oven is not heated above 450°F (232°C). Another essential factor to remember is never to put cold Pyrex into the oven, as the rapid change in temperature causes thermal fracturing.

In other words, the Pyrex dish will shatter into a thousand pieces. At the same time, you should never put hot Pyrex into the fridge or freezer either, as the process can also cause the dish to break in a spectacular fashion.