If you’re on a low-sugar diet or want to start incorporating healthier varieties of desserts into your diet, Stevia is a popular alternative to refined sugar. Stevia is an all-natural sweetener that adds a sugary taste to desserts, but how is it different from baking with refined sugar?

Here are some tips for baking with Stevia:

I’ll elaborate further on the points mentioned above and how you can make the most of using Stevia in your baked goods. Keep reading to find out how to bake with Stevia properly! 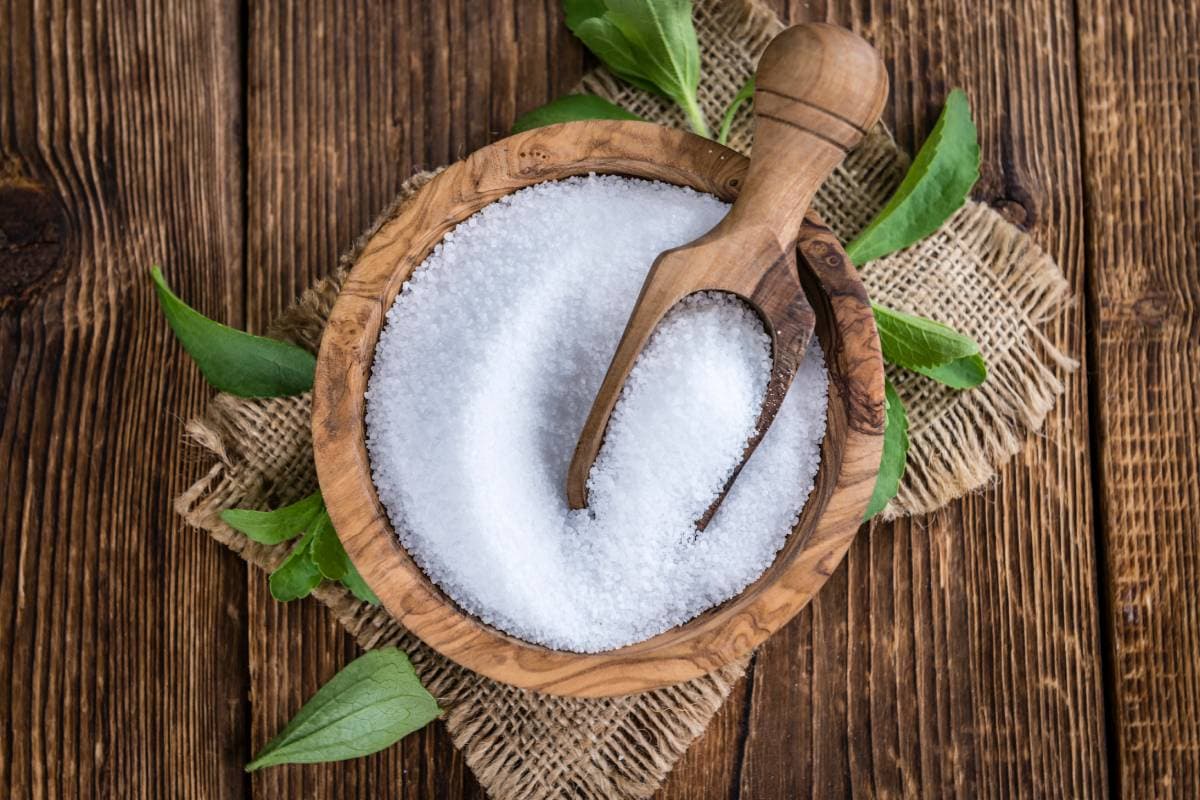 1. Use Less Stevia Than You Would Sugar

Stevia is naturally far sweeter than regular refined sugar. Baking with Stevia can be tricky since a little goes a long way, so you shouldn’t add as much Stevia as you usually would with refined sugar.

To ensure your baked goods don’t turn out sickeningly sweet, it’s important to remember that Stevia is around 30 times sweeter than refined sugar. It’s also common for baked goods to surprisingly taste bitter if you use too much Stevia.

That said, make sure you aren’t using the same amount of Stevia as you would brown or white sugar!

How Much Stevia Is Equal to 1 Cup of Sugar?

2. Lower the Oven Temperature When Baking With Stevia

However, you may need to leave your goods in the oven for a little longer since it’s at a lower setting and will need more time to bake thoroughly.

3. Increase the Bulk of Your Baked Goods

Since you’re using Stevia instead of sugar, you’ll need to increase the bulk of your baked goods. Assuming you used less Stevia than you would sugar, there will be volume in your mixture that needs to be filled with other ingredients.

You’ll need to replace the volume the sugar would’ve occupied with around ⅓ cup (78 ml) of liquid for every cup of refined sugar that you substituted for Stevia (I recommend egg whites). Increasing the bulk ensures your baked goods have the desired texture and don’t fall flat when baking.

Not all Stevia brands will be the same in terms of conversions, as not all brands use the same processing methods when making this natural sweetener. Some brands of Stevia may be sweeter than others, so some conversions will be different.

Following a recipe that uses Stevia instead of sugar will help you tremendously, and following a conversion chart will be your best friend when baking with Stevia!

5. Monitor Your Goods When They’re Baking

It could be challenging to tell when your desserts are done baking since they’re at a lower temperature and left to bake for a different time frame. If you’re struggling to know whether your goods are done baking, stick a toothpick into the middle of the dessert, take the toothpick out and check it.

Can You Bake With Stevia?

You can bake with Stevia. However, the preparation and baking process won’t be the same as baking with regular brown or white sugar. Baking with Stevia requires a few adjustments to the oven temperature, length of baking, and the batter.

Baking with Stevia isn’t too different from baking with refined sugar, but it may take some getting used to since you won’t use the same amount of Stevia as you would sugar.

Benefits of Using Stevia Instead of Sugar

Stevia is well-known for being the healthier alternative to processed sugar. Stevia is a natural sweetener made from the plant Stevia rebaudiana, and it is popular amongst those on low-carb/low-sugar diets. People praise Stevia for being healthy, but what are the benefits?

Here are the benefits of using Stevia instead of sugar:

Stevia is an excellent alternative to sugar, and it comes in various forms (green leaf Stevia, Stevia extracts, and altered Stevia). Although the different forms may taste slightly different, using Stevia for baking is excellent if you want to try something new!

It may take a few tries to get your baked goods the way you want with Stevia, but it’s totally worth it. I hope this article has helped you!