Biscotti tastes slightly sweet with a subtle vanilla flavor note. The almonds give it a nutty and faintly bitter taste but this is offset by the orange zest and if the biscotti includes dried fruit. Biscotti is baked twice and has a hard, dry texture.

Read further to find out what gives biscotti its unique taste. I’ll also explain what pairs well with biscotti, where you can buy it, and how to make it. 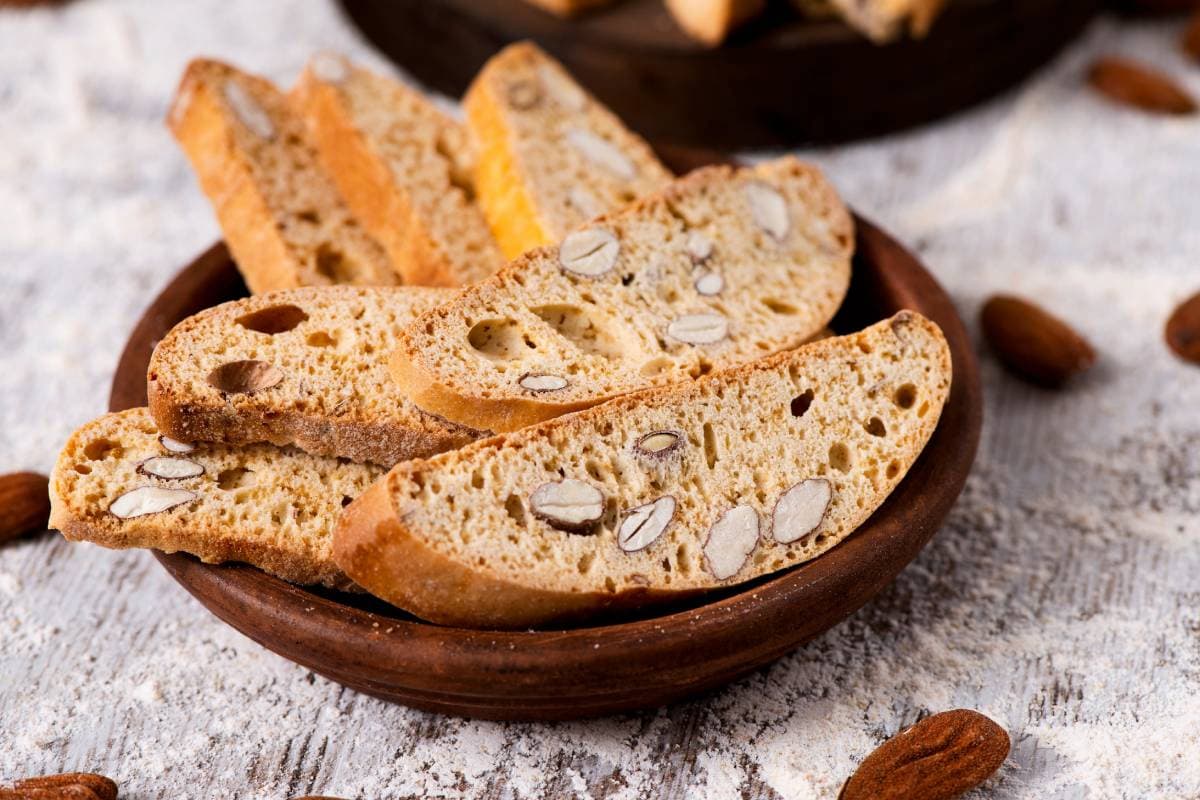 What Gives Biscotti Its Unique Taste?

It’s impossible to find another cookie type quite like biscotti. So, what gives biscotti its unique taste?

Biscotti gets its unique taste from the combination of almonds, brown sugar, vanilla extract, and orange zest. Its texture is also notable as it is hard and dry due to being baked twice.

Biscotti was first created during the Roman ages when people needed a foodstuff that would last during their travels. They discovered that if they baked dough twice, it would result in a hard and thoroughly dry starch, making the staleness less noticeable over time.

The dry texture also meant that biscotti was less likely to become moldy, and would last longer.

What Pairs Well With Biscotti?

In the previous section, I described how satisfying it is to bite into a hard piece of biscotti and how tasty it is. Aside from eating it on its own, what else goes well with biscotti?

Coffee, tea, and hot chocolate pair very well with biscotti. Due to its sweet flavor and nutty texture, it pairs excellently with your morning beverage. It also goes well with desserts like ice cream and sweet wine, and more savory flavors such as plain yogurt, milk, and butter.

I’ll explain why these items pair well with biscotti in more detail below:

Where Can I Buy Biscotti?

Now that I’ve described how delicious biscotti is and some interesting ways to eat it, you’re probably keen to try some. Where can you buy biscotti?

You can buy biscotti online, at Italian specialty stores, and from many grocery stores, including Kroger, Trader Joe’s, and Giant Eagle. Some farmer’s markets also sell it.

Nonni’s Biscotti Variety Pack from Amazon.com is an excellent introduction to biscotti because it’s affordable and offers four delicious flavors:

How Do I Make Biscotti?

If you’re feeling adventurous and want to make biscotti instead of buying it, the good news is that it’s pretty easy to make. So, what’s a good recipe for biscotti?

You can make biscotti by combining two different types of sugar with flavored extracts and traditional cake ingredients. You will need to bake them twice to create authentic biscotti.

Here are the ingredients of biscotti:

Almonds are a traditional biscotti ingredient, but you can replace them with hazelnuts. Adding chopped dried fruit (such as cranberries) can help you to personalize your biscotti recipe.

Here is an easy recipe for tasty biscotti:

Biscotti is a semi-sweet, dry, and crunchy cookie with subtle hints of vanilla. The almonds give it a slightly bitter taste but this is offset by the orange zest and if the biscotti has dried fruit pieces.

Biscotti’s texture is dry and crunchy, and it’s the perfect cookie type to dunk in your tea or coffee.

You can buy biscotti online or at most grocery stores, but it’s easy to make, and you can customize your biscotti recipe by replacing almonds with hazelnuts or adding cranberries.